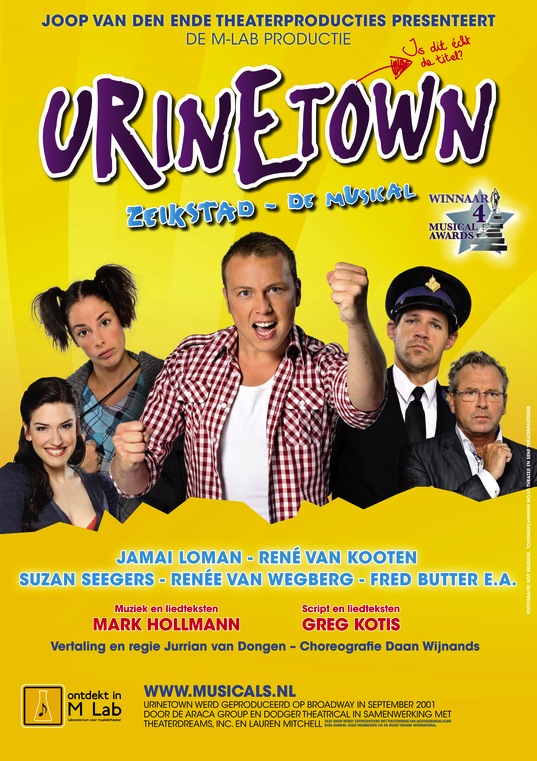 … “There is hardly a show to remember in which direction, choreography and music are so beautifully braided together. Each movement is an excellent musical-choreography in which the storytelling moves along”… (Volkskrant – Patrick van den Hanenberg).

… “Thanks to the great choreography by Daan Wijnands.” … (Das Musical Magazin – Linda English)

Urinetown tells the absurd story of a gray town where water is scarce. Private toilets are banned and the evil company that operates toilets, flourishes by asking exorbitant entrance fees. Bobbie Gold has had enough and urges the people to rebellion. But the situation is complicated when he falls in love with Lot, the daughter of the toilets administrator. Urinetown is full of satirical humor and winks to famous musicals such as Les Misérables and West Side Story. In reverse pantomime style, the unconventional plotline shatters audience expectations of a somewhat pleasant ending.

Urinetown is a tale of greed, corruption, love and revolution. The theme is indeed urinate, but it deals with everyday issues that affect us all. Urinetown played over three years of success on Broadway and became a cult hit. In theater M-Lab in Amsterdam it was the surprise of the theater season 2009. With only positive reactions from press and public Joop van den Ende Theater Productions took the musical, in collaboration with Opus One, Mojo Theater and Theater Partners Senf to 60 theaters throughout the Netherlands.