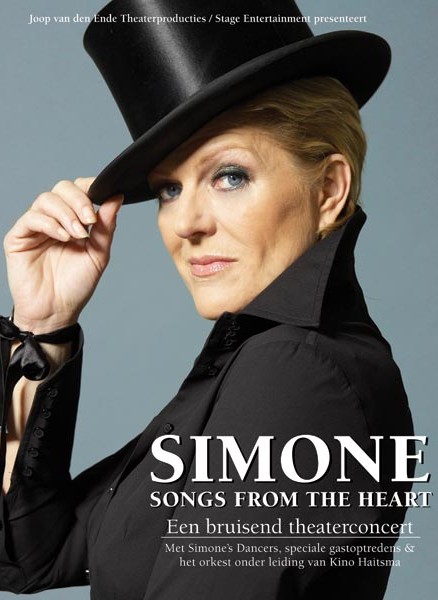 Simone, songs from the heart

In this sparkling theater concert Simone sings her personal favorites and takes the audience, together with a live orchestra led by Kino Haitsma, along a musical world repertoire. From evergreens to musical hits, but also easy listening and especially for the show written Dutch numbers are part of her theatrical concert. In the show Simone is assisted by Daan Wijnands and Joost de Jong.

Simone Kleinsma previously played lead roles in Les Misérables, Sweet Charity, Funny Girl, Sweeny Todd, Joe-The Musical, Chicago, Fosse and Mamma Mia!. For this last production in 2004 she received a John Kraaijkamp Musical Award. On television she starred in Simone & Friends and Kees and Co., in 1999 she received the Academy Award for Best Comedy Actress. Simone released three solo CDs and in 2004 she released the CD / DVD Kleinsma Simone Sings Doris Day. In 2001, Simone received the Golden Harp for her contribution to the musical theatre. Simone was featured in the play One Flew Over The Cuckoo’s Nest and in the theater production At the End of the Rainbow. In October 2008 Simone was seen in the musical Sunset Boulevard.